The Malvern College Family of Schools

The Malvern College Family of Schools

Malvern College UK is a co-educational day and boarding school founded in 1865. Together with its associated preparatory school, The Downs Malvern, Malvern College provides high quality education for boys and girls aged 3 to 18 years. Thanks to its academic rigour, scientific heritage and the pursuit of holistic education, Malvern College UK has acquired an enviable reputation for being one of the most established IB schools in the UK and comfortably surpasses the world average diploma results in all subject areas.

The school pioneered the Nuffield Science teaching approach and was one of the first UK schools to adopt the IB Diploma programme and the Duke of Edinburgh Award scheme. It consistently receives “Outstanding” rankings from the Office for Standards in Education and the International Schools Inspectorate.

Malvern College, together with The Downs Malvern, has produced four Nobel Prize Winners: Francis William Aston, Chemist; James Meade, Economist; Alan Hodgkin, Neuroscientist; and Frederick Sanger, Biochemist and a double Nobel Laureate. Other famous alumni (‘Old Malvernians’) include R. E. Foster, the only man to have captained England at both cricket and football; novelist C. S. Lewis, author of The Chronicles of Narnia; Lord MacLaurin, former Chairman of Tesco and Vodafone; and Baron Weatherill, former Speaker of the British House of Commons.

1865
Founded in Malvern, Worcestershire, with fewer than 20 boys
1939-1940
Relocated due to the war effort and temporarily located at Blenheim Palace
1942-1946
Relocated and housed with Harrow School
1960s
First independent school to have a language laboratory and to pioneer the Nuffield Science approach
1992
Became a co-educational school bringing Malvern College together with the Ellerslie Girls’ School and Hillstone Prep to become an IB World School
2008
Hillstone Prep and The Downs Prep School merged to become The Downs Malvern
2019
Abberley Hall School and Malvern College formed a formal association

Malvern College Switzerland, the seventh international campus, will be opened in September 2021. 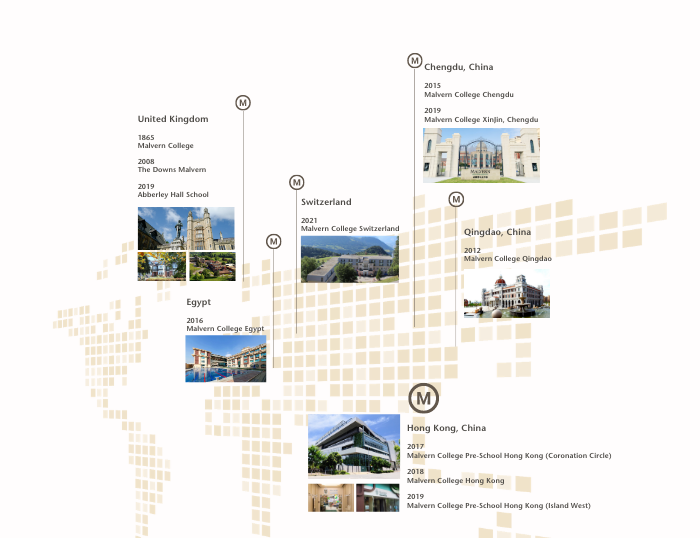